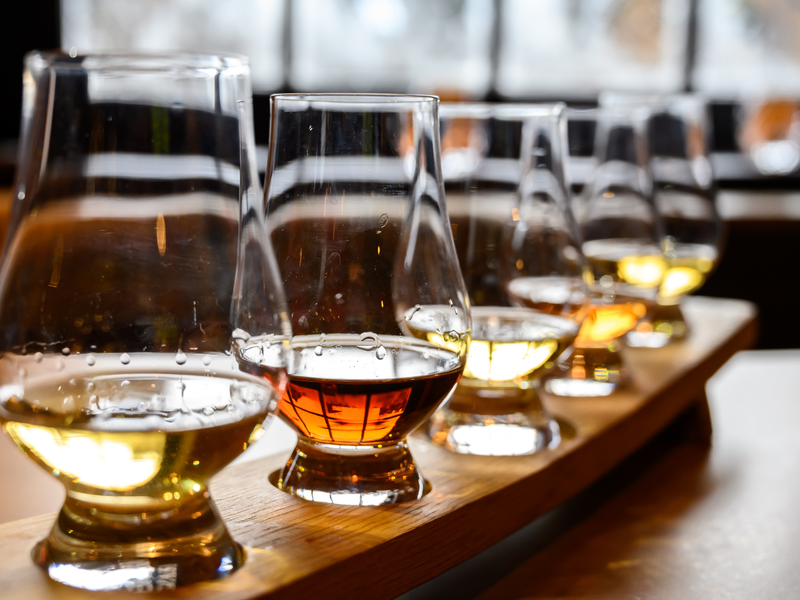 In a previous blog, we talked about five whiskies from around the world that you should try, highlighting whiskies from five different countries and explaining that country’s signature style. At its simplest, whisky is a drink distilled from the fermentation of malt —malt being any grain that has germinated, such as barley or rye, and then dried. In this blog, we’ll further break down the main types of whisky so you can start to understand your own whisky preferences and confidently shop for your next dram in-store.

A Single Malt Whisky comes from a single distillery using only malted barley, water and yeast.

Single Malt Whisky is also produced in other countries such as Canada, Ireland and Japan. In Ireland, any malted cereal grains can be used in any proportion, but like Scotch, it must be aged in wooden casks for a minimum of three years.

Grain whisky is a type of whisky where the main ingredient, instead of malted barley, is a grain such as maize, wheat or rye. They may also include malted barley to provide the enzymes required for mashing; malted barley is a required addition to grain whisky in Ireland and Scotland. Grain whiskies are lighter, and can be blended with single malt and pot stillw huskies to soften their harsher characteristics. They’re often not bottled on their own, but if well-aged, these whiskies can be released as a Single Grain Whisky, which is often seen in Japanese distilleries.

Rye whisky is predominantly made in North America, especially in Canada. In the United States, the whisky must be fermented from a mixture of malt grains that are at least 51% rye, whereas the restrictions in Canada are much looser. Rye tends to impart a fruity or spicy flavour to the whisky, and these whiskies are also often used in cocktails.

Bourbon is an American whiskey made from malted grains that are at minimum 51% corn. Bourbon can be produced anywhere in the U.S., but it has to be from Kentucky in order for the name “Bourbon” to appear on the label. Straight Kentucky Bourbon must be aged for at least two years and doesn’t have any additives, such as flavouring or colourants. A blended Bourbon can include other flavourings but still must include 51% straight Bourbon. Bourbon tends to be sweet, soft, fruity and slightly creamy.

Tennessee Whiskey is essentially the same as Bourbon, but there is an inclusion of charcoal filtering in the post-distillation process which makes it a lighter version. The charcoal mellowing takes some of the harshness and boldness out of the whiskey, but it still has the typical toasted oak, caramel, and vanilla notes with a hint of charcoal or burnt wood.

Whisky liqueur is essentially a flavoured whisky with a distilled, sugar-based syrup, and is often enjoyed as an after-dinner drink over ice, in cocktails or in baking. It’s lighter and sweeter than other whiskies. The two main categories of whisky liqueur are those made with cream, such as Irish Cream Liqueurs, and those that aren’t. The most famous non-cream whisky liqueur is Drambuie, which is made from Scotch whisky, heather honey, herbs and spices.

Now that you’ve got a quick primer about the different styles of whiskies, as well as the five whiskies from around the world that we recommend, it’s time to visit our store with your new-found knowledge! Chat with our knowledgeable staff for our recommendations, and if you’re keen to learn even more, check out local Edmonton podcast Dram Fine for their knowledgeable takes on whisky!