SAKE STUFFS 2: We are back 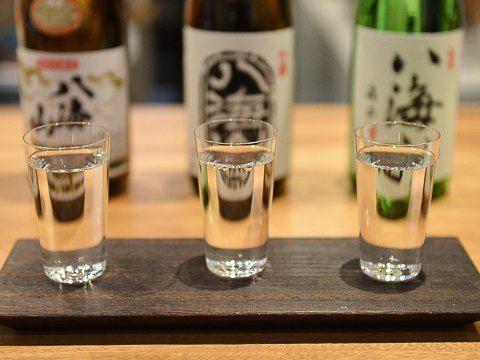 In previous Sake Stuffs, we took a look at sake basics and terminology. This time around, I’ll be applying the information we learned by turning your attention to one specific sake brewery and eloquently explaining why you should be totally stoked on them. Indeed, this week it’s all about the Kozaemon lineup from the Nakashima Sake Brewery.

Brewed in the mountainous Gifu prefecture in the middle of Japan, Kozaemon Sake has a rich history dating back over 300 years. Now run by the adventurous, uncompromising, and incredibly stylish CEO Munetaka Nakashima Kozaemon, the Kozaemon lineup of sake is among the most distinct and unique to be found in our cooler. Last year, we were honored to have Munetaka visit our store and host an event in our Tasting Room, in which he subsequently blew our minds. Currently, we have four different selections from the brewery on the shelves:

Kozaemon House Junmai: First up is Kozaemon’s House Junmai which is produced by aging their base junmai sake for a year and then blending to reach the final product. You’ll  notice a hint of cocoa on the nose with layers of earthy umami,

ethereal fruitiness, and gentle acidity. Out of all the Kozaemon selections, this would be the most suitable as a warm sake in my opinion, but it is also fantastic if you prefer to serve it chilled as well.

Kozaemon Junmai Ginjo Bizen Omachi & Tokubetsu Junmai Shinanon Miyama Nishiki: Sitting side by side on our sake shelves, these two sake selections are both brewed using rice milled down to 55%. However, as the names indicate, each one is made with a different rice variety (Omachi rice and Shinano Miyama Nishiki rice respectively). The Omachi sake showcases the sweetness of the rice variety and provides a delicately soft texture on the palate. The Shinano Miyama Nishiki is the brewery’s best-selling sake and it’s no wonder once you taste the layers of green apple, honeydew, and floral notes with a vibrant and fresh acidity. One of my personal favourite sakes in our selection.

Kozaemon Junmai Daiginjo: The highest grade of sake in our Kozaemon lineup, this Junmai Daiginjo is made with Yamadanishiki and Aiyama rice. The result is a highly powerful, fragrant, yet elegant sake with a silky smooth texture. Absolutely luxurious!

Kozaemon Junmai Umeshu: Essentially, Umeshu is a Japanese liqueur made with ume fruits (aka Chinese plum, or Japanese apricot). In this case, the Kozaemon brewery selects the finest plums from the Beni Nanbokai orchard, which uses a series of mirrors to direct light and ripen their fruits to perfection combining them with their junmai sake. The result is an absolute flavour explosion of sweet dark fruits balanced by a brilliantly tart acidity and mild bitterness that leaves you clamoring for another sip.

–Stephen Bezan is the manager and purchaser of all things cold in the Sherbrooke Cooler (Beer, Sake, Ciders, Rockstars, etc.). He also has an irresponsible obsession with potato chips.